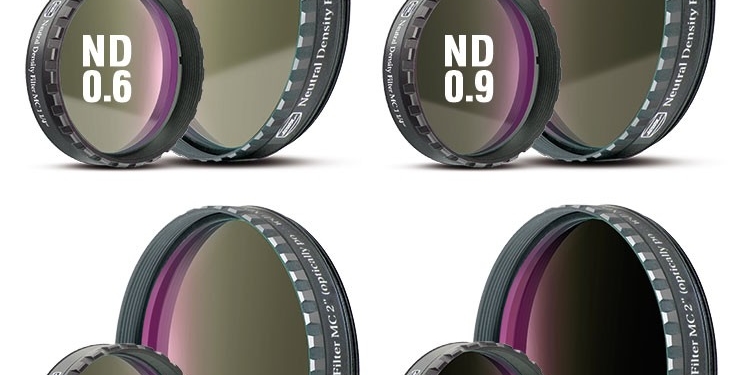 Lunar observing is very popular amongst a large number of amateur astronomers. For some, it has been the Moon that has been the first celestial target that they have pointed their telescope towards, and/or the original source of their astronomical curiosity and fascination that has led them to further develop their interest of “more things astronomical”.

What’s more, its not long now until the 50th anniversary to the Apollo 11 Moon landing so its a perfect time to turn your telescope towards our nearest neighbour!

The Moon has a huge number of craters formed from meteorite/asteroid impacts, mountains, valleys, and seas from volcanic eruptions and lava flows long ago. These wide ranging Lunar features can be quite mesmerising to observe or image. However, depending on its phase, the Moon can be quite bright to look at, and therefore observing the Moon, like it is at present, can therefore be uncomfortable and can also mean that fine Lunar details can get “washed out”.

Baader Planetarium offer a range of neutral density filters to help cut down the brightness/glare and improve contrast whilst Lunar observing, making observing the Moon a much more pleasurable experience. 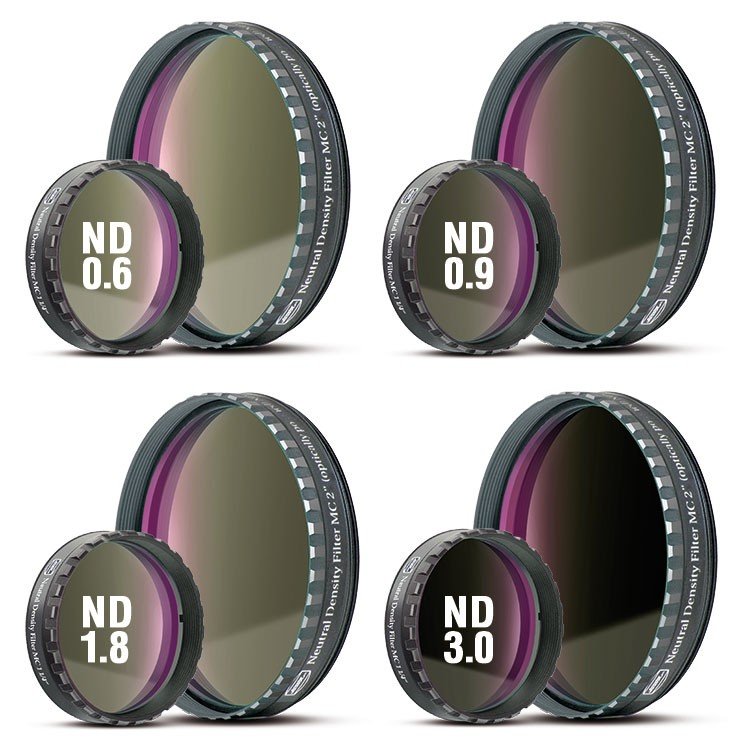 Baader offer four different optical densities (transmissions) of their neutral density filter. The higher the ND-number the darker the filter appears, and less of the light in transmitted. The four optical densities available are listed below in order of decreasing transmission.

For Lunar observing, which ND filter to use would depend on the phase of the Moon, telescope aperture and your own personal preference. For example you could use the ND0.6 which has a 25% transmission for around the first/last quarter phases of the Moon, with the ND1.8 or even ND3.0 for viewing the Moon when full.

The glass used in each filter is finely and accurately optically polished so they can be used at high magnification without any loss in sharpness. Each filter also has Baader’s Phantom Group coatings applied, which results in no ghosting or reflections.

Although Lunar observing is often done at high power, which usually means the use of 1.25″ barrel eyepieces, each of the above four filter optical density options are available in both 1.25″ and 2″ sizes, so they will fit any of your eyepieces. To use them, you simply screw a filter into the barrel of your eyepiece and then insert the eyepiece into your telescope. Alternatively you can mount them in a nose-piece of a diagonal or in a filterwheel.

The filter housings are threaded on both sides. This allows other filters, such as the Baader coloured filters, to be combined (stacked) with the neutral density filter, for planetary observing (more about this in a future post). 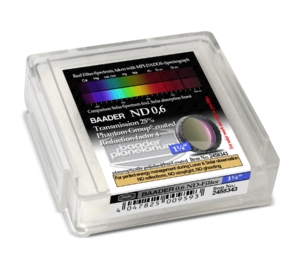 Each of the filters comes in a sturdy, strong plastic storage case with an internal filter drawer that slides in/out. The Baader filter cases can be stacked one on top of another, or joined laterally/horizontally, to create a sturdy multiple filter “storage unit”.

The Baader Neutral Density filters are available from ourselves (here) or from your local or favourite astronomy retailer.