Baader Planetarium at the Practical Astronomy Show in Kettering 2022

You are here:
EventsNews

On Saturday 19th March at 9am prompt, the doors opened at the Kettering Conference Centre to welcome a long queue of eager visitors to attend the 2022 UK Practical Astronomy Show (PAS). This was the second time that this event has been run since its first outing 2019. Originally planned to be yearly, the event had to be postponed in 2020 and 2021 due to the pandemic. This event would be the first astronomy show in the UK since COVID.

Baader Planetarium’s UK representative attended PAS representing Baader Planetarium GmbH with a small stand. Preparation for PAS had started several weeks beforehand with a shortlist of display and demonstration products and associated information leaflets and a new pull-up banner. The final shortlist of Baader products included four demo cases which contained a very wide range from the Baader UFC system, Baader/Zeiss 68 system, a RT Steeltrack with SteelDrive II Motor focuser and controller and a case with the ClickLock eyepiece clamps. Also included was the new Filter Changer and Camera Tilter (FCCT) for use with a range of QHY CMOS imaging cameras on the Celestron RASA 8″, Flip mirror II Star Diagonal, Q-turret eyepiece revolver with Classic Orthos, ASTF Solar filter, SkySurfer V, and a range of some of the high popular T-2 spacers/adaptors. 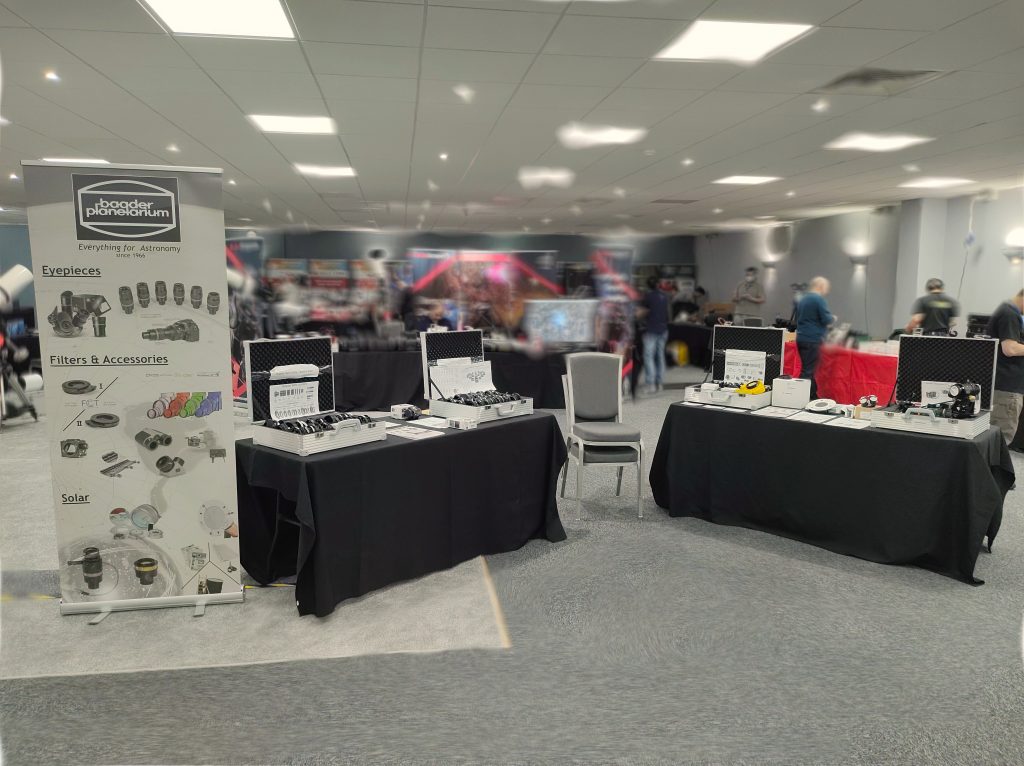 Our stand before the crowds arrived at PAS event

The stand was set up on the Friday afternoon and also gave the opportunity to chat to other exhibitors which we had not seen for a few years. On the Saturday morning we were greeted by unusually very warm weather and sunny blue skies – a rarity for the UK at this time of year. I arrived at the venue just after 8am to do some last minute “tweaking” to the stand layout and also to have the opportunity to have further discussions with some of the dealers about Baader products.

When the announcement was made that the event was starting and the doors were being opened to the public, it immediately became very busy….and it remained busy until the close of the event at 5pm. Throughout the day lots of people came to the stand where lots of discussions about Baader products were had, with many comments on how much people like our range of products and their quality. There was a wide range of interest across the Baader Planetarium range of products, of the enquiries, discussions and demonstrations the most popular were those related to the ClickLock adaptors, UFC system and its usage, AstroSolar ASTF filters and film, Flip mirror II and then Q-turret and Baader Classic Ortho eyepieces. By the time it got to 5pm and the show was over speaking to some exhibitors commented how busy it had been and what a “buzz” of activity and interest there was. It seems that the first post-COVID astronomy show, and the first one of the season, had gone well. It was a great enjoyable day.

The next main UK event is the International Astronomy Show that takes place in October and we very much look forward to being part of that 2-day exhibition.