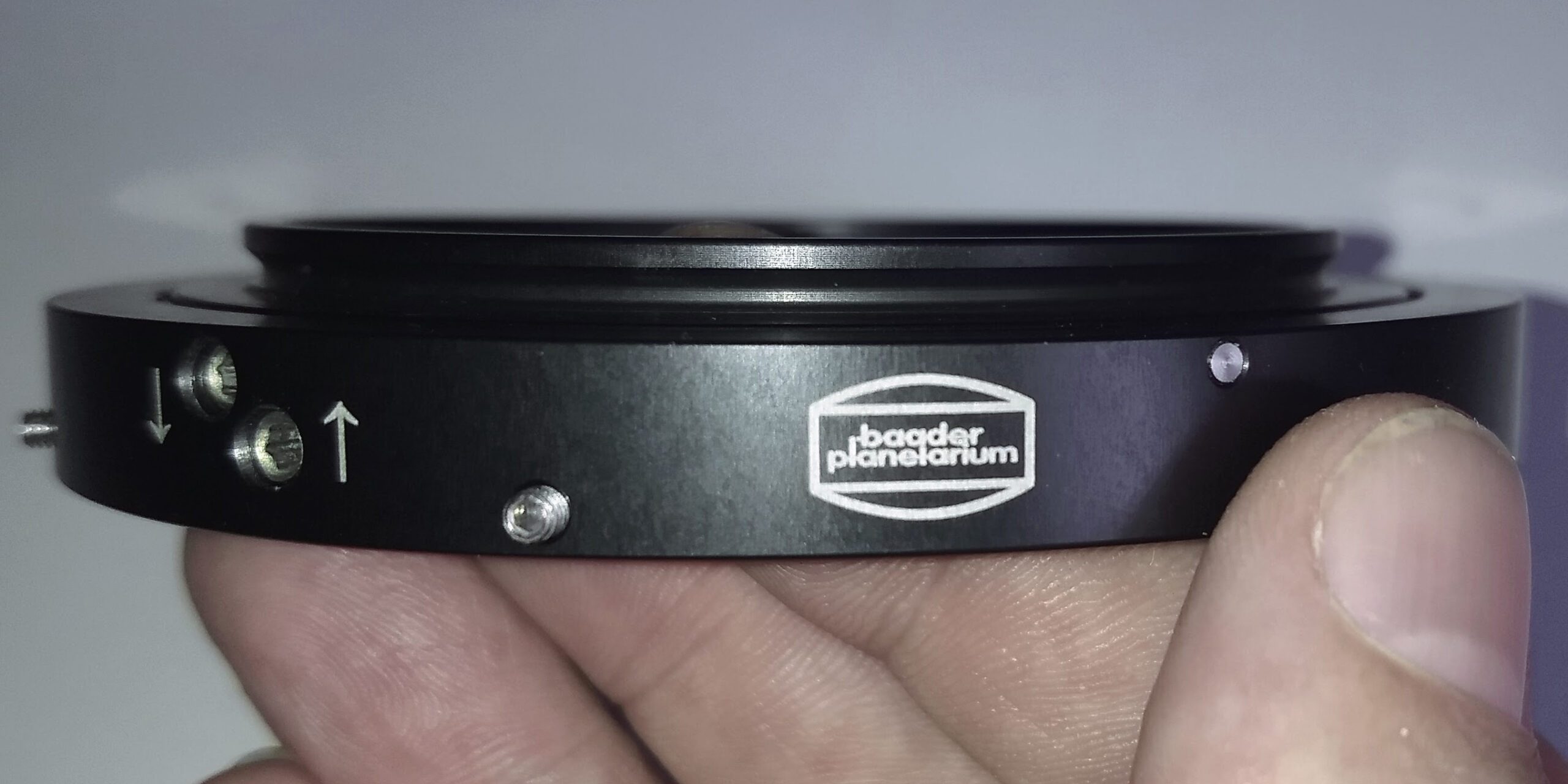 The effects of image tilt can ruin a great astrophoto. Image tilt (or image plane tilt) happens when an area towards the edge of the field exhibits out-of-focus or imperfect star images and is caused by the image sensor not being pefectly perpendicular to the light path. A mis-aligned focuser tube, flattener/corrector lenses, extension adaptors, camera angle adjusters as well as a camera sensor tilt in the camera body itself are all causes of image field tilt. Being able to correct for this image plane tilt is essential to get perfectly focused sharp star images across the field of view. 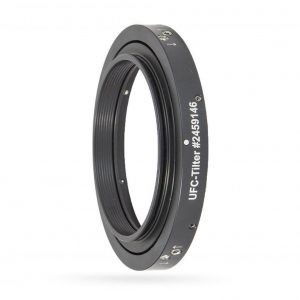 For those that do astroimaging with our Universal Filter Changer (UFC) Baader Planetarium are pleased to annnounce a NEW accessory to help compensate for image plane tilt – the Baader UFC-Tilter (#2459146) . This is a telescope-side UFC S70 accessory that is compatible with the entire UFC system and can be used with many refractor and Celestron 11″ and 36cm RASA imaging setups. The unit allows an adjustment tilt shift of the UFC Base (and an attached camera) of up to 1° to compensate for misalignments in the image field. The Tilter is only 9.75-10.50 mm in optical length depending on amount of tilt adjustment made. 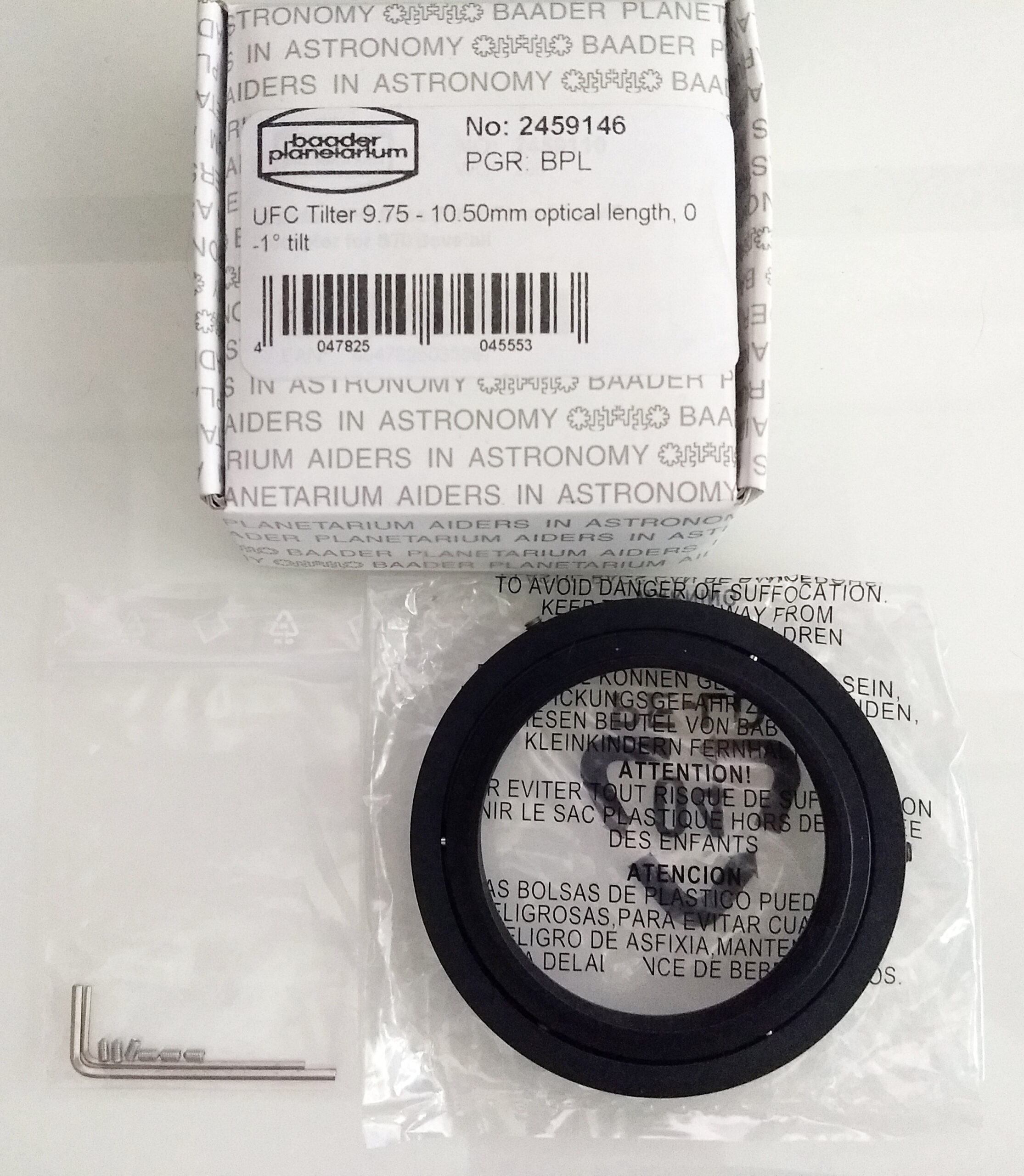 The UFC Tilter comes in a Baader Planetarium labelled box with its name, code and description clearly displayed. Inside the box there is the UFC Tilter and a small bag containing six Hex-screws and two Allen keys. The small hex-screws are used to secure any of the UFC S70 telescope-side adapters in place using the smaller of the two Allen keys. The larger Allen-key is used to attach to or remove UFC camera-side adapters from Baader UFC Base (Filter Chamber) telescope-sided S70 dovetail receptor (optical height: 13 mm) if needed. 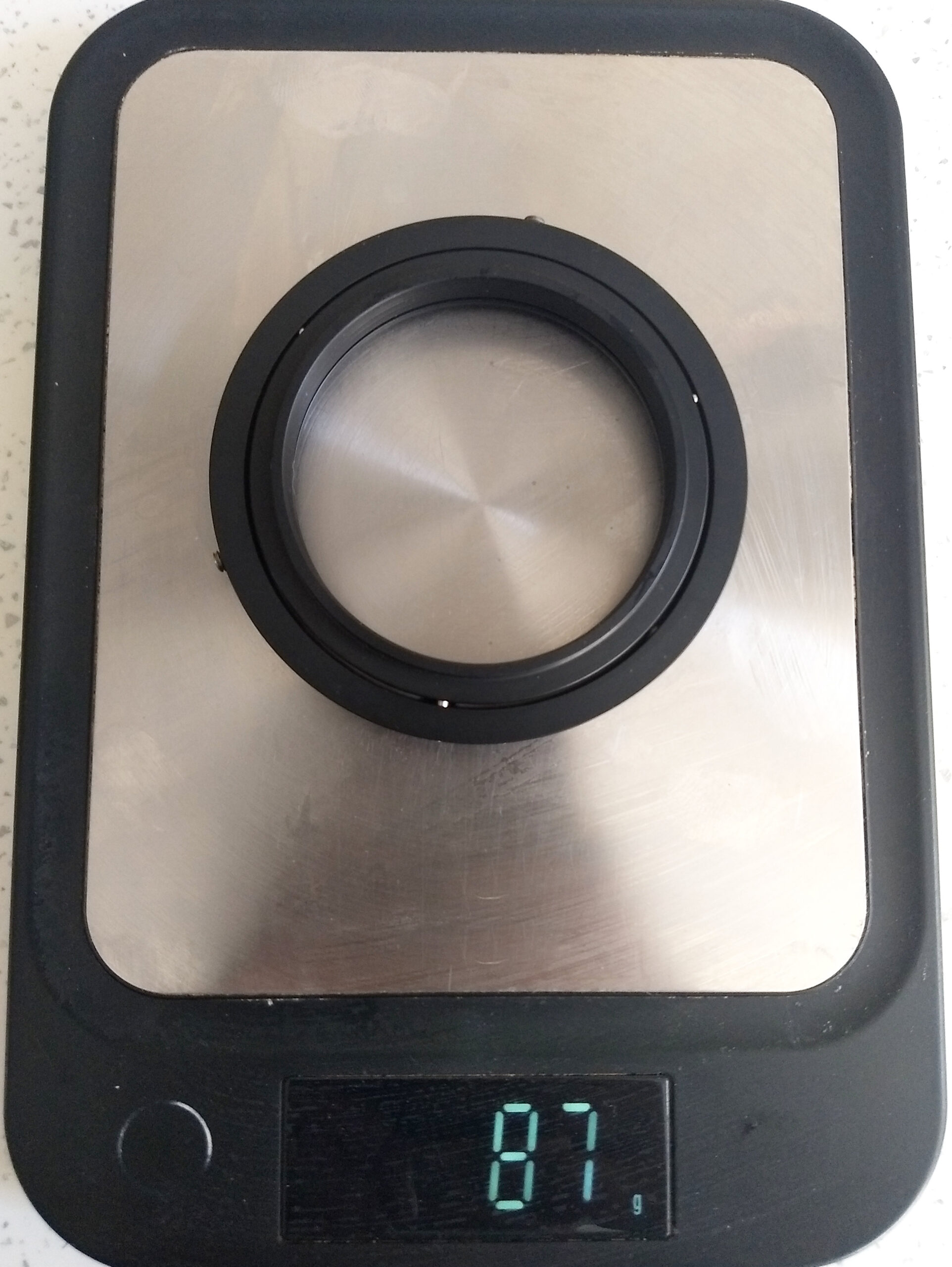 The Tilter unit measures ~91mm in diameter, which is just slightly larger than the UFC Filter Base, and it is not heavy adding a mere 87g to the overall payload. On the Tilter’s camera/UFC-Base facing side there is an adjustable (inner) tilt ring with an S70 dovetail for secure attachment into the UFC Base Filter Chamber. Three equally spaced steel pins that go through the outer body of the tilter and into the inner tilt ring act as a “security system” to prevent the tilt ring from falling out. On the telescope side of the Tilter there is the circular opening that accepts any of the UFC’s S70 telescope-side adapters. 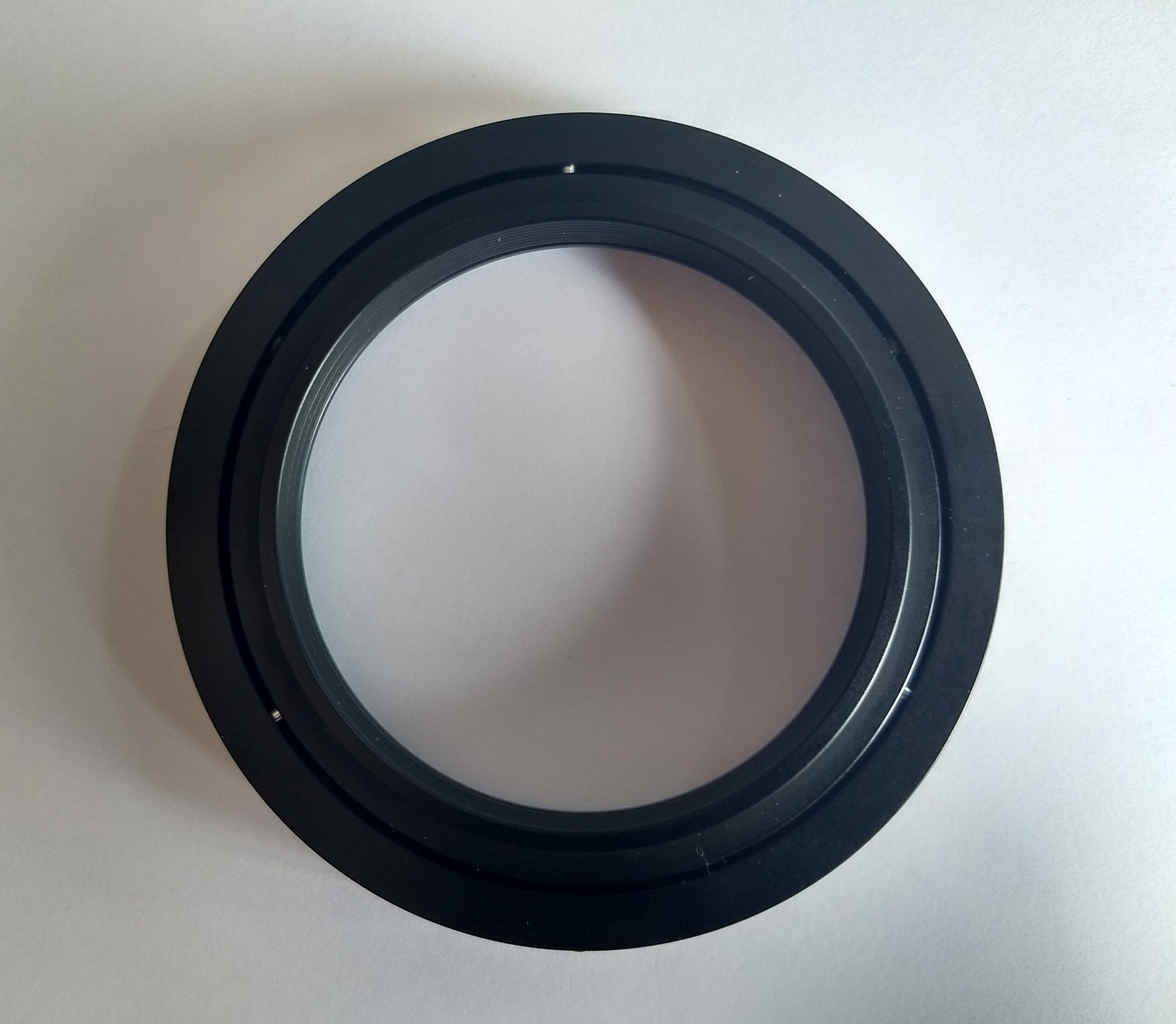 Three pairs of screws for adjusting tilt are positioned 120° apart around the outside edge of the unit with tilt adjustment direction arrows clearly labelled, all of which make adjustments very easy. One of the issues with some inexpensive tilt adjusters is that the tilt adjusting screws are located on the camera-facing plate so that when a large-body cooled imaging camera (or the UFC Base) is attached, the adjustment screws are obstructed making further adjustment(s) very difficult or impossible and only accessible by removing (and then replacing) the camera or UFC after each adjustment(s) made.

The UFC Tilter functionality is especially valuable for the Celestron RASA-community with the RASA 11 and RASA 36 optics where the original “on-telescope” tilt adjustment screws no longer need to be used. Adjustment(s) of the three front-side tilt screws on the RASA lens assembly are required, often with the removal and replacement of the imaging train if these screws are obstructed, but it is still not guaranteed that the adjustments are able to produce a perfect alignment across the full field of view since lateral play in the original manufacturers threads and fittings are just too big for repeated threading and unthreading of cameras and adaptors. With the UFC Tilter the whole “tilt operation” can be achieved without time consuming image train removal. Furthermore, the whole of the camera+UFC+UFC-Tilter-assembly can be removed from the OTA for safe travel or storage and the next time it is all remounted, none or only small fine adjustments may be required for perfect chip realignnment and all in only a few minutes. So your RASA set up is ready for action as fast as it is when it is taking images…! 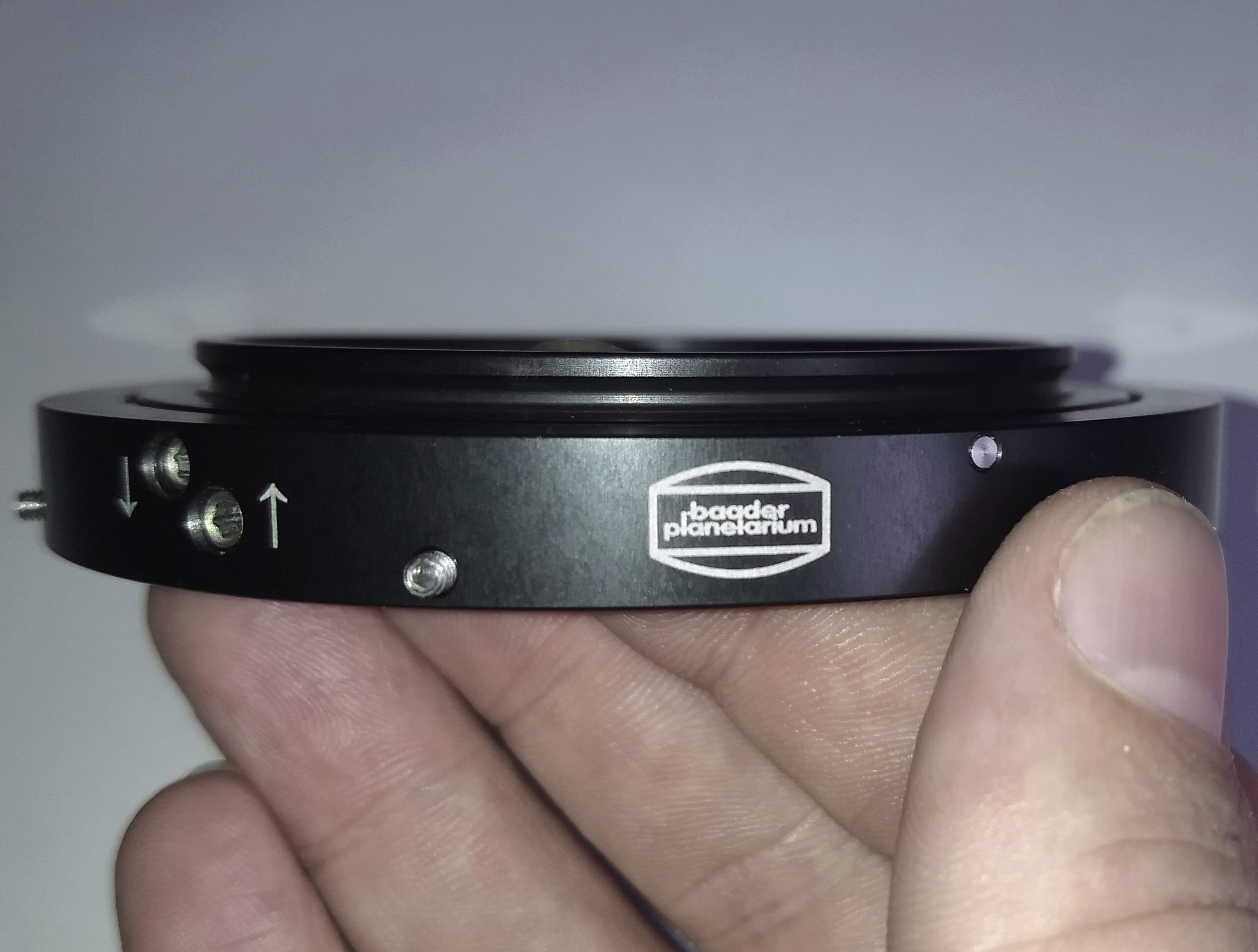 Side view showing the S70 telescope-side securing hex screw (bottom) and one pair of the tilt adjustment screws with tilt direction arrows.

Attaching the Tilt Adapter to a UFC set up is simple. If you already have a UFC with a telescope-side adapter in place, simply loosen the six retaining screws on the Baader UFC Base (Filter Chamber) telescope-sided S70 dovetail receptor (optical height: 13 mm) (#2459110) , remove the (scope-side) adapter and replace it with the UFC Tilter with its S70 dovetail side facing the UFC Base “S70 port” and then retighten the six Hex screws. Next, add your telescope-side S70 adaptor into the Tilter’s S70 opening and secure with the unit’s six Hex screws.The image below shows an example configuration. 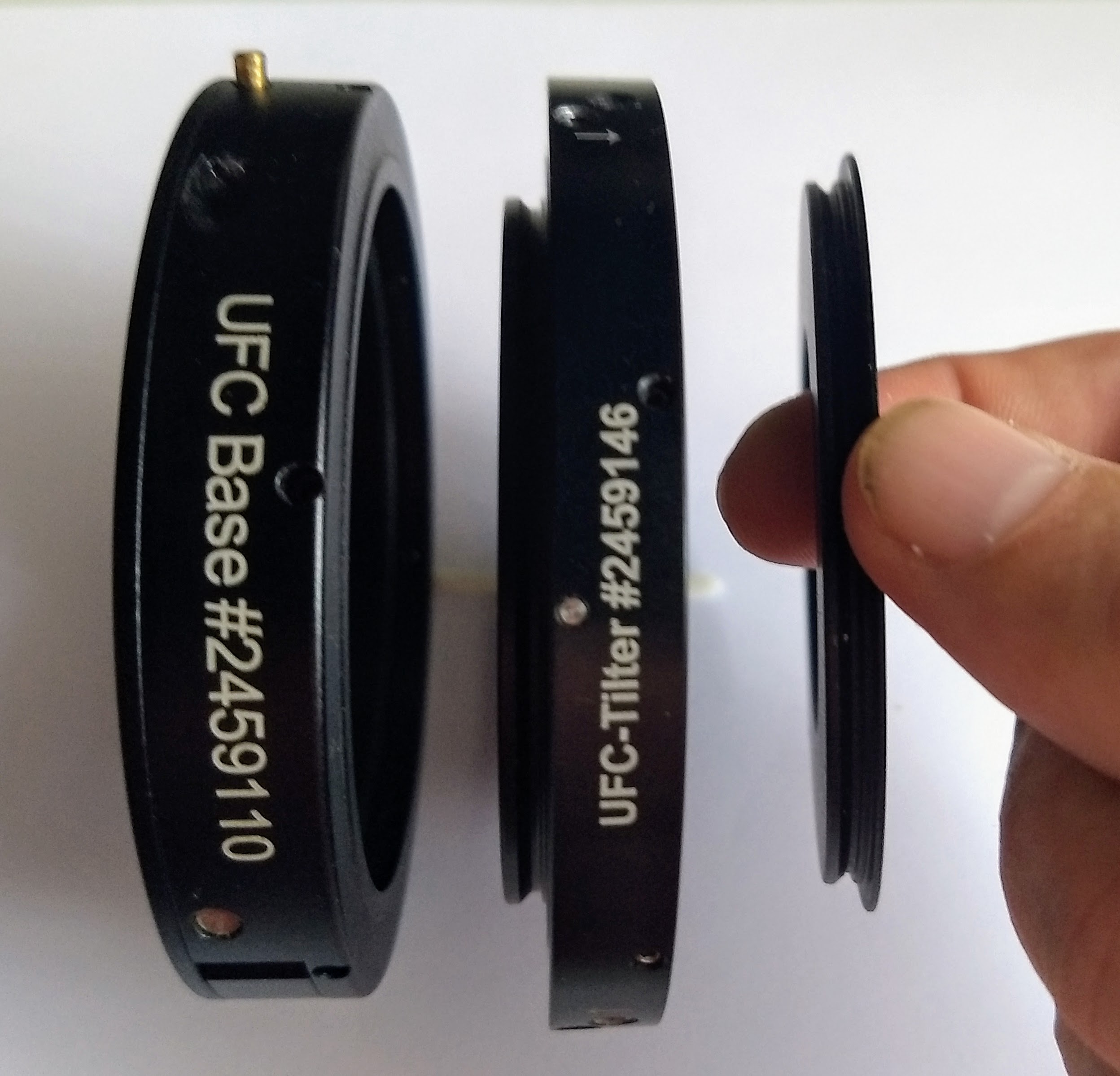 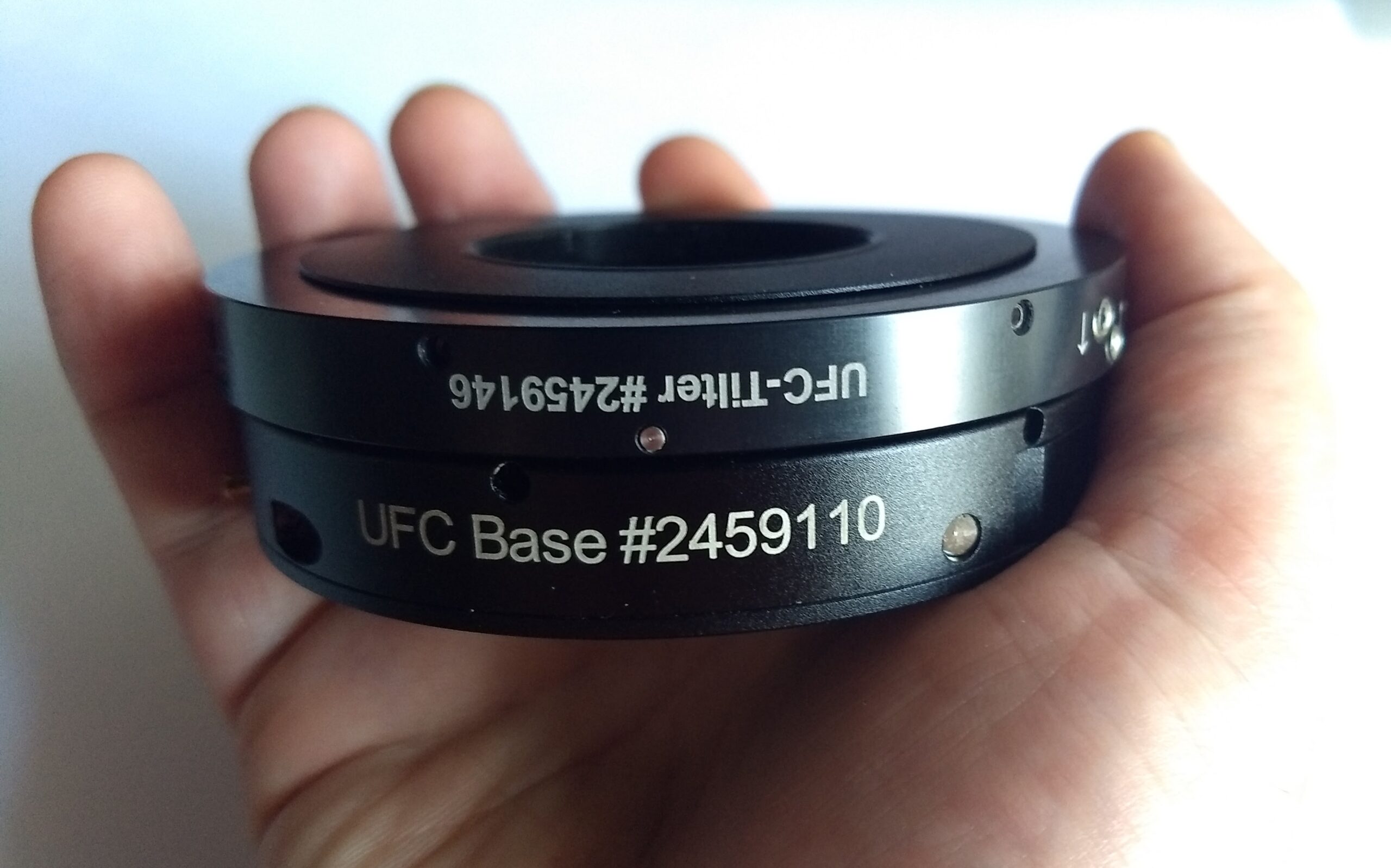 In use, with all parts of the imaging train in place and attached to a telescope, we suggest that the UFC Tilter is adjusted so that the middle of the sensor is set at the required optimum distance from e.g. reducer or corrector (may require use of spacers such as the UFC fixed or variable length extensions). This is initially achieved by rough adjustment of all three pairs of tilt adjusting screws being moved equally which will allow for about 0.3 mm of inward or outward (camera) travel of the inner tilt ring. By viewing the resulting image, each corner of the image needs to be addressed separately by working each of the three individual sets of inward/outward adjusting screws for “final tweaking” of each corner by up to an additional of +/-0.2 mm until all of the chip corners in the image show perfectly formed stars. The tilt adjustment screws only need to be tightened with “mild force” as it is two hardened-steel contact surfaces doing the adjustment action and once contact is made, no further movement will occur. This functionality is also available for the new Baader M68-Tilter which is compatible with the entire Baader M68 adapter system.

Tilter in action and how the adjustments are made.

All the components that are used in the UFC Tilter are produced in Baader’s machine shop in Mammendorf, Germany. This is in order to reach the necessary highest level of precision, to be able to adjust any corner of the chip in a backward/forward direction with ZERO lateral play during the adjustment procedure!

The Baader UFC Tilter product looks so very simple, but we know that “the devil is in the detail”..